A week of painting & art history in Bruges 2017

The Medieval architecture of Bruges, with it’s many canals and bridges, spires and gables make it a jewel of Northern Europe. The city’s bustling centre, its two squares side by side; the Market Square and Burg Square are lined with picturesque gabled buildings while the impressive 13th Century Belfort towers high above the Market square.

During our week in Bruges you may wish to capture the city’s fine examples of Gothic architecture, explore it’s busy markets and beautiful churches or you may prefer to draw and paint away from the more popular areas of the city, discovering quieter stretches along the canals or views of one of the many bridges.

Whatever your preferred medium, the beautiful linear architecture of Bruges lends itself perfectly to drawing and painting, whether drawing with pencil, pen, ink and wash or using watercolours or oils. We will also be taking a trip to Ghent and Brussels during our visit.

Bruges has an incredible artistic heritage, being the birthplace of the Flemish School and the Northern Renaissance. Flanders during the thirteenth to fifteenth centuries was one of the most prosperous areas in Europe due to it’s manufacture and trade in cloth and in this climate the patronage and development of painting flourished with artists including Hans Memling and Jan van Eyck. The quality of the rich fabrics produced and sold in Bruges at this time can be seen in the paintings of the city’s artists such as those of Jan van Eyck.

During the week there will be visits to art collections and galleries, and one of Bruges’ most celebrated galleries is the Groeningemuseum with it’s rich collection of Flemish painting, including Jan van Eyck’s masterpiece ‘Madonna with Canon George Van der Paele (1436) which hangs alongside the ‘Madonna by the Master of the Embroidered Foliage’. 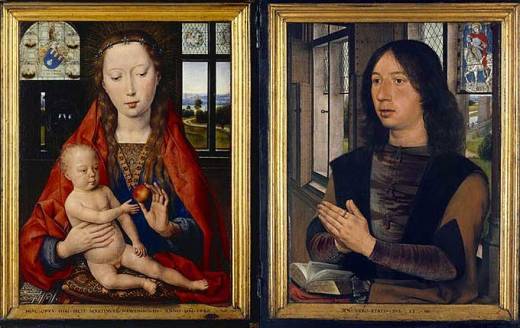 In the Church of Our Lady whose tower is the tallest structure in the city, you will find the ‘Madonna of Bruges’, an exquisite marble by Michelangelo of around 1504.

Alongside all that Bruges has to offer we will visit the historic cities of Ghent and Brussels, both within easy reach by train. Brussels with it’s exquisite Grand Place, is one of the most magnificent and memorable squares in Europe with it’s mix of Gothic and Baroque architecture and it’s imposing Hotel de Ville and will provide our subject matter on this visit. The nearby Galleries St Hubert with their elegant glass-vaulted spaces are close by and there is a maze of narrow cobbled streets surrounding the Grand Place to explore and draw.

While in Brussels there will be the opportunity to visit the Musee d’Art Ancien (Musees Royaux des Beaux Arts de Belgique) with it’s outstanding collection of fifteenth century Northern Renaissance paintings, in particular the stunning paintings of Rogier Van Der Weyden and his workshop. Rogier Van Der Weyden was city painter to Brussels in the fifteenth century and his ‘Portrait d’Antoine de Bourgogne’ and ‘Pieta’ of around 1441 are outstanding examples of the Flemish School.

Other notable works in the collection are portraits by Hans Memling and his ‘Virgin and Child’ (ca 1467) and ‘Martyrdom of Saint Sebastian’ (ca1475?), a ‘Temptation of St. Anthony’ by Hieronymous Bosch and there is a wonderful room devoted to Pieter Brueghel which includes ‘The Fall of Icarus’, ‘The Census at Bethlehem’ and the ‘Massacre of the Innocents’.

During a visit to nearby Ghent we will see the ‘The Adoration of the Mystic Lamb’ otherwise known as the ‘Ghent Altarpiece’ (1432) which is housed in St. Bavo’s Cathedral. The altarpiece by Hubert and Jan Van Eyck is an early fifteenth century polyptych which consists of 12 panels and is considered to be one of Northern European Arts masterpieces.